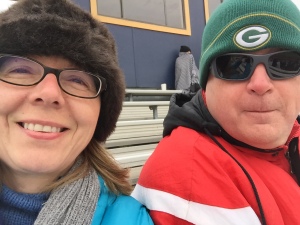 When I first found out that moving to Texas was a possibility, one of the first things I did was a comparison of the average daily temperatures between Wisconsin and the Lone Star State. I liked what I saw. I figured I could live with average daily highs in the 90s June through September if that meant average daily highs December through February were 60. December, January and February average daily highs in Green Bay, Wis., are in the mid- to upper-20s, and the winter of 2013-14 was downright frigid, with average highs and lows 6 to 10 degrees below normal. Winter seemed to stretch on and on and on, and moving to a warmer climate seemed like a pretty good bet.

The week of Thanksgiving here in Georgetown, Texas, was wonderful. It was in the 60s and 70s so I was able to stain the fence in our back yard. Loved it! There were some cooler days, but I figured it was just an anomaly. Things would average out. 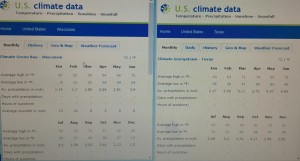 December had some nice days, but it was really spotty, and of course, I remember the cooler days more vividly than the warm ones. I had bragged to my Wisconsin friends that high school soccer games in Texas began at the end of December, and how nice it was going to be to not freeze our butts off watching or playing them.

Boy was I wrong! Daughter played her first scrimmage on Wednesday and when the game started it was 36 degrees with a wind chill of 27! Yeah, that was a heat wave compared to the single digit temps in Wisconsin, but they also weren’t sitting outside watching a soccer game. (OK, so about 75,000 showed up to watch the Green Bay Packers play on Sunday and it was 20-some degrees. But when you’ve got 75,000 butts crammed into a stadium, I contend it’s a little bit easier to stay warm. I’ve been there, I can attest to that fact!)

Husband and I wore our warmest clothes, boots, jackets, gloves, blankets, etc., but it was bone-chilling cold. And there was no concession stand selling hot chocolate. They could have made a few bucks off us that day! I think it took about eight hours after the game for my fingers and toes to thaw out.

There was another scrimmage today, and of course, it was in the upper 30s and drizzling all day. Fortunately, it wasn’t as windy as the first game, so it didn’t seem quite as cold. And it only took the drive home for my extremities to thaw out this time.

There’s one more scrimmage tomorrow and the forecast shows the high at 63. Can’t wait. I might even get a suntan!