There was a lot of unpacking to do after a cross-country move.

It’s hard to believe we’ve lived in Texas a full year now. So much has changed for all of us. New jobs for me and my husband, and new school for daughter. New friends all around. I had no idea what to expect when we moved here, and some things have been easier than others.

One of the things I’m most thankful for is the friendliness of the people. There are a lot of people moving to central Texas these days, but natives are easy to spot — not just for their southern drawl but for their politeness in general. While Wisconsinites aren’t generally a rude people by any means, Texans take manners to a higher level. “Yes ma’ams” and “no ma’ams” flow freely from people of all ages to people of all ages. Even daughter, who’s only 16, has gotten used to being called ma’am. Because that’s how it is here. 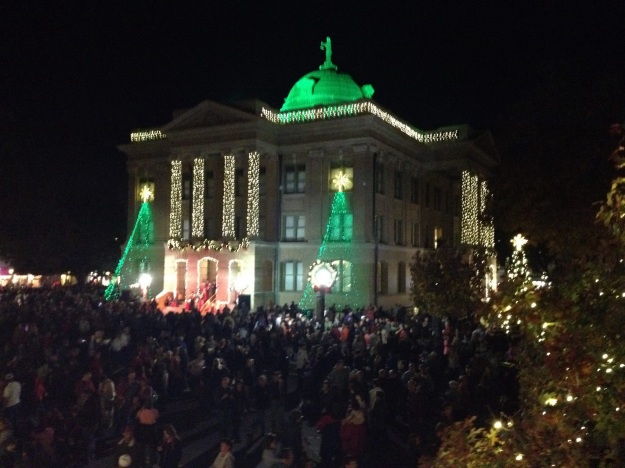 Holiday lighting of the Georgetown, Texas, square on the Friday after Thanksgiving. It was in the low 70s.

I also love the weather in Texas. Yes, it gets unbearably hot in July, August and September. But last year, in November and December, I also was outside staining our fence because the weather was warm enough. Not to mention that on the Friday after Thanksgiving, when the holiday lights were turned on in our city’s town square, husband and I were able to eat outside without having to wear coats. I have no problem trading three months of hot weather in summer for the five or six months of cold weather we were used to in Wisconsin.

… turned into a beautiful sunset.

And the clouds. Oh, how I love the clouds here in Texas. The cumulus and cumulonimbus in particular hang so low in the sky that, at times, I think I can reach up and touch them. I could look at them for hours; they put me in such a good mood. And the stratocumulus clouds have led to many beautiful sunsets. I have been fortunate to capture many photos of them and hope to take many more.

My garden in raised beds in late March.

Used netting and pie tins to scare the birds away from the tomatoes in June. It helped, but it was a little too late.

Gardening, which was a breeze for me in Wisconsin, has proven to be rather challenging here in central Texas. While I love being able to start gardening in March (two full months before I’ve been used to), it’s been difficult learning how to deal with the bugs and the birds. And my gardening space is much, much smaller here, the price of living in a subdivision where I can almost touch the neighbor’s house. On the bright side, I’ve been able to plant things here — in zone 8b — that I never would have been able to in Wisconsin — zone 5. And I’ve had great success with some flowers, which have brightened up some stressful days.
Speaking of our subdivision, I’ve been blessed with being able to buy a brand new house, our first new house. The pluses are that everything is brand new and needs little fixing. The minuses are that everything is brand new and needs little fixing. I guess what I’m trying to say is that for me, new — lovely as it is — isn’t all I thought it would be. Don’t get me wrong, I feel blessed that we were able to afford a new house. But I still miss the character of previous older houses we’ve owned. 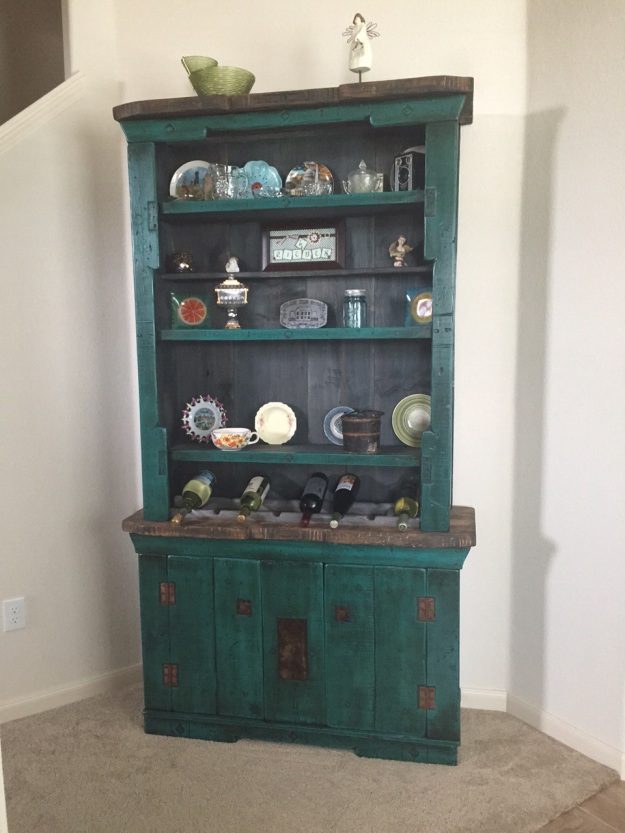 I love this cabinet/hutch we had made for our house.

The good thing is that I’m still putting my own touches on our house, and in the past month or so have added a few pieces that have added a little of that character. One piece in particular, a cabinet/hutch made out of reclaimed wood and stained a beautiful distressed-looking green, is now anchoring a barren wall and is a favorite spot in the house.

What the next year holds for me, I hope, is more of the same. More making friends, more figuring out gardening problems. More making our house feel more like a home. Oh, and more beautiful Texas skies. A lot more.