Given that my experiment to grow fall tomatoes from seed failed, I checked out tomato plants today while shopping. At the grocery store. I think I tried plants from HEB (a popular Texas grocer) last fall, but I planted those in planters on my patio. Today’s beauties, however, were destined for the raised beds, which were only an idea in my head last fall.

The tomato plants I bought today are 3 or 4 times bigger than last year’s, two Celebrities and one Super Fantastic. I’ve never heard of the last one, but I didn’t want all three to be the same. And they were cheap, but if the saying “You get what you pay for” holds true, they might not do well.

Anyway, I think it’s worth a try. There’s plenty of room in the raised bed, right where I had high hopes for the tomatoes I started from seed in July. This time though, I took the advice of a fellow Texan, DirtNKids blogger Shannon. She told me to put crushed eggshells in the soil around the plants for more blossoms.  I’ve been saving eggshells for a couple months now, so today I baked them as she suggested and put them in the hole where the tomato was going.

Of course, now looking back at Shannon’s suggestion, I see she said to work them into the soil around the plants. Hopefully the way I did it won’t affect the plants negatively.

They’ve got a good start — two of them already have small tomatoes, along with a few blossoms. And they can’t do any worse than the ones I started from seed, right? 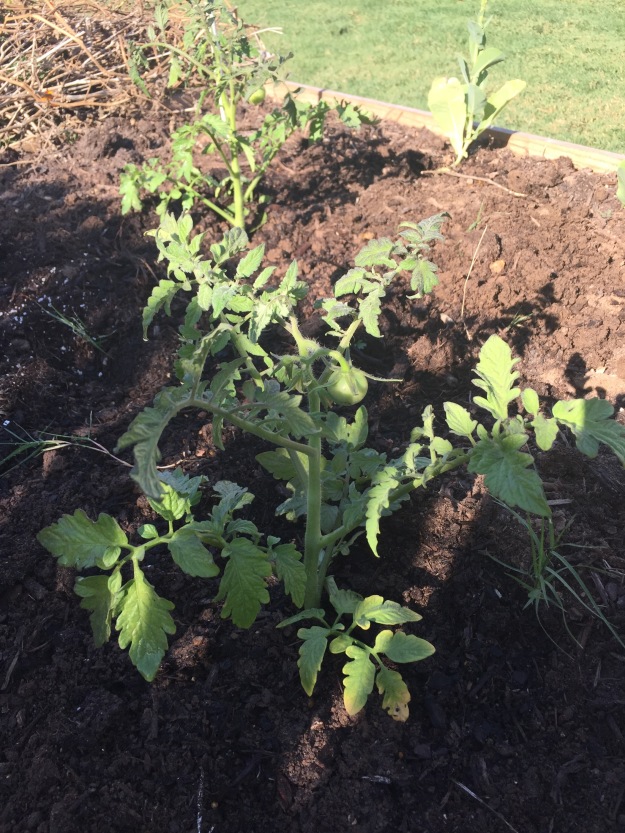