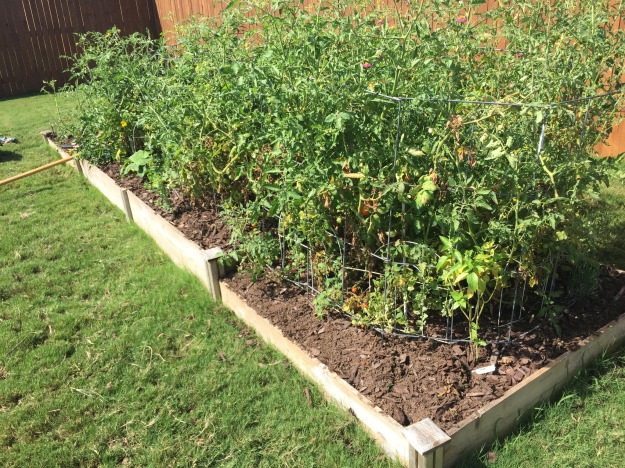 It was a good year for my tomatoes, even though I don’t have many photos to prove it. My raised beds (above) have been cleared of their remnants for a couple weeks now. But for several months before that, I was able to pick enough to eat daily, whether on salads, BLTs or just cut up in chunks and sprinkled with salt. I had a few issues with birds eating the tomatoes, but I avoided most of those problems by picking the fruit as soon as it started turning yellow. The leaf-footed bugs stayed away from the tomatoes, too, and while I had problems with slugs on the lettuce, they also ignored the tomatoes.

I’m still not quite used to the different seasons for growing tomatoes. Back in Wisconsin, tomato seaon would just be getting into full gear, and I’d be trying to pawn off extras on my co-workers and friends. I haven’t quite accomplished that yet, but I’m satisfied at the way this summer’s tomatoes turned out. I can’t say the same for my attempt at fall tomatoes though. I sowed seeds in mid-July and put healthy transplants into the raised beds at the very end of July. They didn’t survive even a week. Not sure if it was the heat, the usual Texas high 90s, low 100s, or what. At the same time, I transplanted cucumbers and pumpkins, and almost all of those have survived, thriving even. I actually even threw a few tomato seeds in the ground about 4 days before we got 10 straight days of rain and cooler temperatures. Only one seedling has emerged. Maybe fall tomatoes aren’t in the cards for me after all.