One of my favorite things about carving pumpkins is what comes out of the slimy inside of the pumpkins — seeds! While I have fun watching daughter carving, I comb through the slime, separating the seeds from the orange goop, anticipating the salty, crunchy goodness to come.

And really, cleaning the seeds and getting them ready to roast is the hardest part. 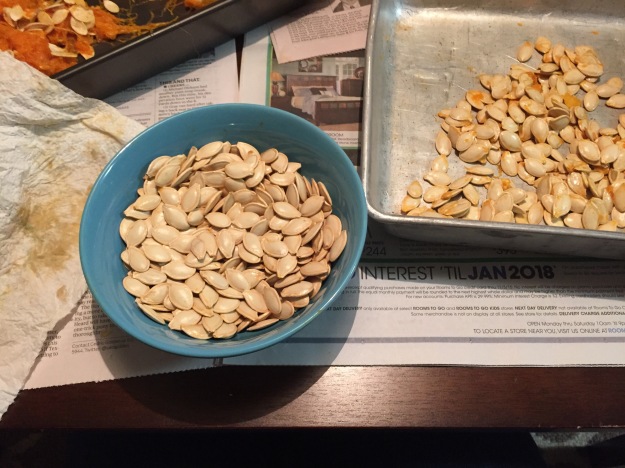 For me, it’s a several step process. First I remove the big chunks of the pumpkin goo and strings. Then, I’ve found the easiest way to get the little pieces of pumpkin flesh off the seeds is to rub them between sheets of a paper towel. The dry paper towel, when it connects with the slimy seed, seems to be a good conduit for pulling off the remaining tiny pieces of pumpkin. And I think it’s important to get off as much of the stringy, gooey gunk as possible. It’s not good roasted.

Once I’ve done that, it’s one final rinse with water. Then I spread the seeds out flat on a cookie sheet to dry. 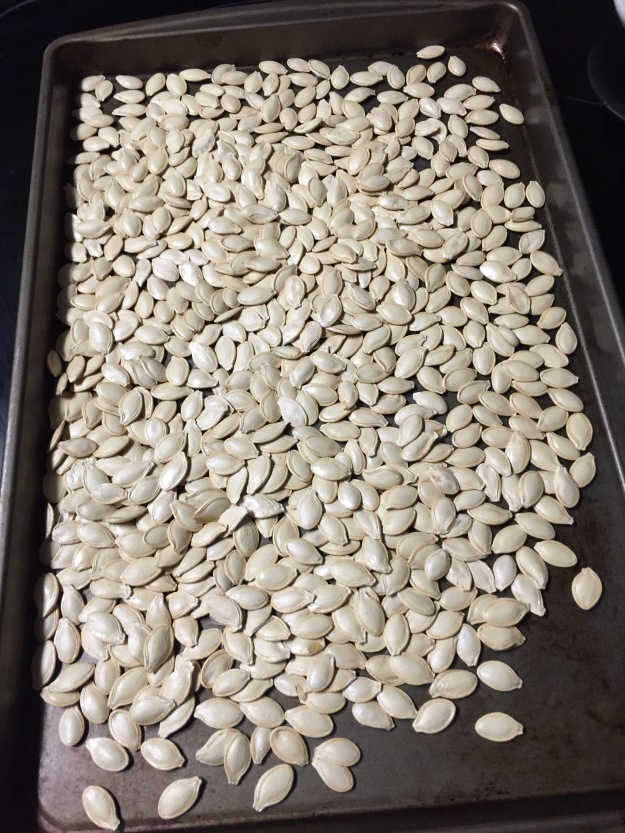 Most of the time, overnight is fine. However, it doesn’t hurt if they dry on the pan for a day or two. Mine did this year because I just didn’t have the time to roast them immediately.

And when you’re ready to roast them, it only takes the two simple ingredients shown above. Really. In addition to the seeds, all you need is seasoned salt (I like Lawry’s) and butter. For 2 cups of seeds, melt 2 to 3 tablespoons of butter in a bowl. Then add in the seasoned salt till the mixture gets a little thick. I don’t measure, I just pour until I think it looks right. If I had to guess, I’d say I use a good tablespoon, or maybe a bit more.

For this batch, I started thinking I maybe put in a bit too much seasoned salt because it was  kind of clumpy. But as they roasted, I realized the big clumps would probably fall off. So I wasn’t too worried.

I roast the seeds in a 250 degree oven for an hour, turning them with a spatula every 15 minutes. Sometimes I roast them 10 to 15 minutes longer because I like them a bit darker and crisper. With this batch, I had to run an unexpected errand, so after 60 minutes, I turned off the oven, left the pan on the rack and opened the oven door.

When I got home about a half hour later, the seeds were roasted perfectly, almost melting in my mouth. They’re so-o-o darn delicious! A perfect fall snack. There’s only one problem. I need more!